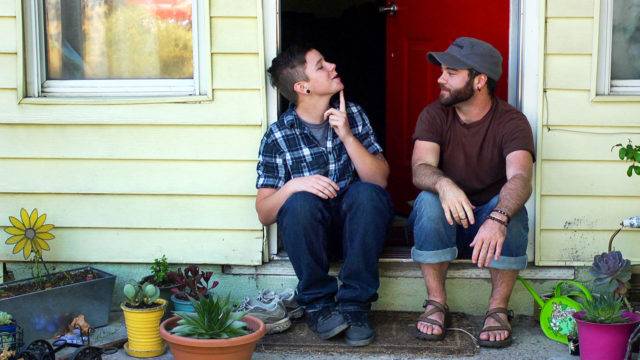 As we prepare for our Indie Lens Pop-Up film screening of REAL BOY on Thursday, June 1, KLRN's Community Advisory Board (CAB) member Dr. Ellen Riojas Clark, Ph. D, and Rene Rico, Ph. D, had the opportunity to preview the film and write a review.

REAL BOY,  is the coming-of-age story of Bennett, a trans teenager with dreams of musical stardom. During the first two years of his gender transition, as Bennett works to repair a strained relationship with his family, he is taken under the wing of his friend and musical hero, celebrated trans folk singer Joe Stevens.

Ellen: REAL BOY is a fascinating documentary about transitioning from a girl to a boy. The issues of sexuality, family, and identity are presented from the reality of an insider perspective. I think what it brings to us is the pain of being in a body that is not representative of who you know you are vs. that of what others see. Rico, why is it important to see this documentary?

Rico: Ben’s insider perspective is paramount to understanding not only FTM transition, but also about challenging and informing the outsider perspective and giving a voice to these emotions and experiences. Throughout the film, Ben not only struggles with his personal issues (body image, dating, feeling frustrated or lost) he also struggles to be(long) – to be an independent, happy young man, but also to find acceptance wherever he can find it.

Ellen: Makes me wonder how do kids who are not middle class and represent different ethnic groups deal with these dilemmas. The issues are compounded when one does not have access to therapists, surgeries, medicine and all that is necessary to have a successful transition. Your dissertation dealt with the sexual identity of gay middle school boys. What does your research indicate?

Rico: Like the gay Mexican American youth in my dissertation, Ben’s identity performance is multifaceted – so much of who he has become depends on what he’s been through and what he’s had access to. The influence of technology (YouTube, Google) on Ben’s transition  – finding “others,” feeling that he’s not alone – is fascinating.

Ellen: This is a film to help us understand the differences between gay, transgender, etc.  Poignant when Ben’s mom says “I thought you were going to tell me you were gay. Thank goodness, not transgender.” The film speaks to the importance of family and societal support and understanding. Hopefully, it will bring hope to the many more who are in this process.